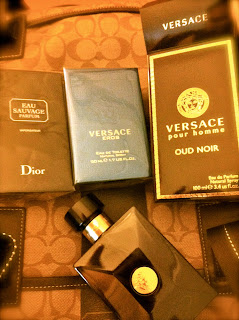 Dusting this blog off since the last time I actually wrote was way back in 2012. Been quite a while but hopefully I can keep it up a little bit here. So might as well share with you my Duty Free purchases this April 2013.

Duty Free is usually a good place for me to look at recent releases in the designer game. In duty free I don't really sniff out anything. I walk around and just look around and see which new releases are available. I usually pick 2-3 fragrances without sniffing and enjoy the blind buying segment and see how they do on my skin overseas.

This time around I had Issey Miyake Summer 2013 and Eau Sauvage Parfum on my radar. I already smelled Parfum and just wanted a bottle of it. Summer has a kiwi note in it that I find interesting but sadly duty free did not have it. Which really surprised me. Also another surprise was Versace Pour Homme Oud Noir. I really did not expect it to be available in Holland. When I saw that beautiful black and gold bottle as a tester , I quickly grabbed the box behind it. My first impression of Oud Noir is actually good. Good longevity on it already, it's tame in projection. Some say it's a disappointment for a EDP, I find it does well and no complaints here. The scent itself is closer to a M7 then the next big bold oud based scent. I kinda expected that, and felt it's actually one of the best oud's in the designer game at the moment. They did a good job with it, and happy with the purchase. To those who are huge into the Oud game, yea it's not bold and won't blow your socks off but to a newcomer to the Oud game it's perfect for you to give you a small taste.

Next I saw the newest Eros from Versace also. I decided it's been a while since I actually bought two Versace's in one shot , but what the hey. This one was probably the big disappointment in the three I bought. I haven't worn it on my skin yet, but initial sniff it really did not blow me away. It reminds me of a few designers already.

That's my haul ! Thanks for tuning in 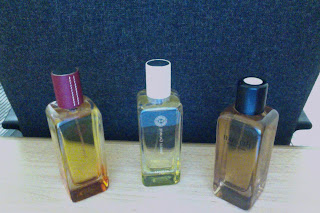 I love the duty free in Munich. Case in point is they have a Hermes boutique in the duty free section. Every time I stop by I grab two new bottles of the Hermessence line until I have them all. This time I decided also to get Bel Ami since I always wanted to get a bottle. The two hermessence I decided to get since this picture isn't the best quality are Vanille Galante & Paprika Brasil. I now own 6 of the 9 of the Hermessence line. Rose, Osmanthus and Brin are the three that I am missing. That will be fixed next stop in Munich to get them all to finish the line. I love them all since the quality is superb.
Posted by Marc at 10:40 AM 17 comments:

The Return of Subscriber's Choice ! Your Contestants are here 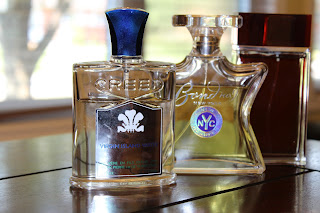 An epic return to the subby's ! Two Niche vs one designer, who will rain supreme ? That is your choice. You can vote below and get a 2nd vote on your bottle. One vote on the blog, one vote on youtube, and yes another on the facebook group : Fragrance Guru Nation ! You can vote three times if you wish. The Winner will get a full review next week. First week of September. Keep it locked in and thanks for voting !
Posted by Marc at 12:02 PM 26 comments:

My Scent of the Day : Nejma's Puro 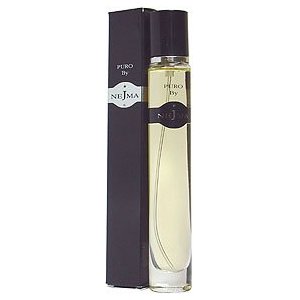 My Scent of the Day today is a sample sent to me from a friend in Germany. He sent me multiple samples and I will be testing them on my skin in the next few weeks. Today I tackle Nejma's Puro. I never smelled this before but when I went to my fragrantica page I saw I had it checked marked as I want it which means either someone requested me to smell it and I felt the notes interests me so thanks to my friend I don't need to blind buy it. Well that does not matter because it would of been a great blind buy because Puro hits you with a great dose of rum and cinnamon which is the first thing that hits me. I was sold right away when I smelled that. They list mojito in here, but the rum overpowers it. This is nicely blended, and it's not too dark since it does have some uplifting quality in the background like the mojito, I can feel some of the tobacco once it settles. It's mostly spicy with the spice, some woods, and that boozy and tobacco hits are really nice. This is a tobacco based fragrance but with the surrounding notes of cinnamon and other spices and rum and that uplifting mojito it really did wow me. It does remind me of something, like Boss Bottled meets Allure Homme. I might be wrong but it's familiar. Overall very nice and will be a future buy for me.

Working on this review today: Tonka Imperiale by Guerlain

Alright first post back .. it's been a while so I hope some of you are still following. I will be doing random updates here on my blog. Today is a day off for me and that means I am tackling some sniffing. First thing to do is start working on future reviews on youtube. I posted I believe 9 full review this time home and that means I need to replenish and keep working on new ones. I have over 37 full review done testing and just waiting to be posted on youtube but that does not mean the testing and sniffing is over. Tonka Imperiale is some major juice. You guys know I love this stuff ever since I first sniffed it. It's a masterpiece ! These kind of reviews are hard to make , just like Chergui & Rose 31 which I finally posted on youtube. These are fragrances that I feel are worth the high price tag, but reviewing them is hard because you need to make sure to really evoke the full picture to what someone would think when they first smell this to the fine detail of what each note gives in a fragrances. These are the kind of reviews that I relish and challenge myself to do. They do take more time to do, I believe Chergui and Rose 31 took me two full years of testing to really get the full approach. Tonka Imperiale is at the tail end of testing and it's time to put everything I wrote down into words and that is what I am working on today. Looking into how many sprays where the best, what season this one did the best for me. The occasions you can wear it, what notes stand out and which ones are in the background or the one that do not show up. What makes this worth $250 a bottle against other fragrances. Is it versatile ? Can something replace it that is much cheaper. These are all things I do when working on a review. It's Tonka Imperiale's turn today to get my full attention.
Posted by Marc at 9:53 PM 5 comments:

Chene has a strong oak and rum note, very warm dark woody fragrance which is well balanced. I would consider this a great man's man scent, I really don't feel this would be worn by a woman (it could) but the strong woody note in here really makes it manly. The rum fits in well and it just a great composition by Lutens yet again. I love his line which is so warm and great for fall and winter. They almost never disappoint .

Working on this Review

It's that time again to start new journeys and old journeys alike overseas. I do the bulk of my testing here, I call this the lab. I bring decants of my current fragrances that I am testing for a future review, I decant old favourites and bring new samples to test out some new things that I might purchase in the future. Overseas is the lab of testing out everything out there. Today I am working on an old favourite from the house of Creed called Virgin Island Water.

I've had my bottle of VIW for over a few years now. I remember fondly when I first sniffed this fragrance, my eyes grew wide and I don't think I ever smelled something so perfect for summer before. I was excited. This fragrance now since I've been testing this one for well over 2 years now, and probably has had the longest testing phase out of any Creed I've reviewed previously (it's actually one of my most used niche bottles at the moment). This one is coming to an end, I am almost done testing this one out , come April my journey with VIW will be over and the review will be ready for the small screen waiting in line with other fragrances to be fully reviewed on youtube and to be judged. I'll tell you this VIW has made quite an impact on me in the past few years, actually a few great memories came with this one. I remember I brought a decant on this to Aruba with me, and what a perfect juice for this type of trip, now every time I smell this fragrance it brings me back to that place, the sand, the wind, the sea. The coconut filled alcoholic drinks. It takes me on a journey, and isn't that what scent should do to you ? It's a great feeling and I can't wait to share this journey with you. This is by no means a perfect juice, I don't think that really exists but this is why I test, some fragrance just never get me in the mood or get me excited to wear it... this one does and does it well.
Posted by Marc at 3:58 PM 3 comments: